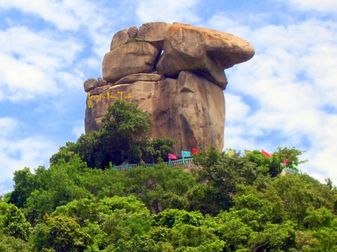 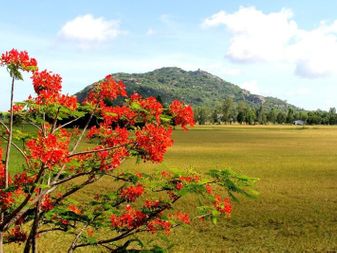 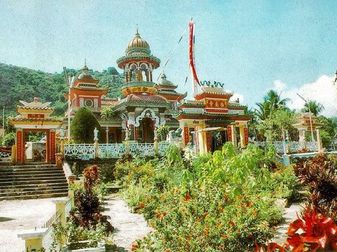 Tây An Cổ Tự, a nexus of two major cultures, India and Ancient Viet, formed in 1847

We hope that this translation would do justice to the source document of the Oracles written in Vietnamese by Lord Master Huynh Phu So, the founder of Hoa Hao Buddhism, aka Harmony Buddhism.  He launched his Mission in 1939, at his native village named Hoa Hao, Tan Chau Township, Chau Doc City, An Giang, Vietnam.  That is why the religion adopted this local name, which is now the faith's sacred site with millions of followers.

The translation aims to bridge the language and cultural gap between the older Hoa Hao Buddhists and their younger generation born or growing overseas.  It also helps those Non-Vietnamese speaking people interested in studying Harmony Buddhism.  The Vietnamese diaspora communities are now 43 years old since their exodus in April 1975 when Saigon fell to communism.  On their freedom-seeking journey to the West, they took their cultural and linguistic assets with them and have tried to conserve their traditional heritage, in which ancestral worships still predominate.  Harmony Buddhism is part of this legacy which builds on the three major religions, Buddhism, Taoism, and Confucianism.

In a nutshell, Harmony Buddhism is part of this legacy which builds on the three major religions, Buddhism, Taoism, and Confucianism.  As a translator, I would highly appreciate any comment the reader may like to make on the quality of the translation, especially the esoteric terminology of Buddhism, Confucianism, and Taoism, especially those who are not Vietnamese-speaking for the level of readability and the like.  Furthermore, as the reader may be aware, there are many discrepancies in concepts existing between the source and target languages.  Thus I hope that this translation will bridge the two languages and the two cultures.

The translation should be better understood in Vietnamese cultural and linguistic contexts, which can trace back to hundreds of years.  The Vietnamese language, called "Quốc Ngữ," was a combination of Hán Nôm, the traditional combination of Han (written Chinese) and Nom languages.  Thus, to understand the Quốc Ngữ, it is necessary to understand its etymology.  In the early twentieth century, the Quoc Ngu incurred the French cultural and linguistic influence when it became a Latinised one.

We believe that all the readers will better understand the Oracles and Poems which Lord Master has written, either through its original texts or their corresponding English versions.  Some notes explain the problematic words in Vietnamese and English endnotes.  We will continue to improve the translation and update the website layout and design from time to time.

In this website, the main task is to translate the Oracles and related Poems and Writings by Lord Master, including the Notes prepared by Hoa Hao Buddhist scholars and articles on the history of Harmony Buddhism, written by fellow Hoa Hao Buddhists throughout the time.

Thanks for your reading and for contributing any suggestion which you may like to make as part of the evangelical projects in the age of globalization as Lord Master said:

"We yearn for the world to be liberalized,