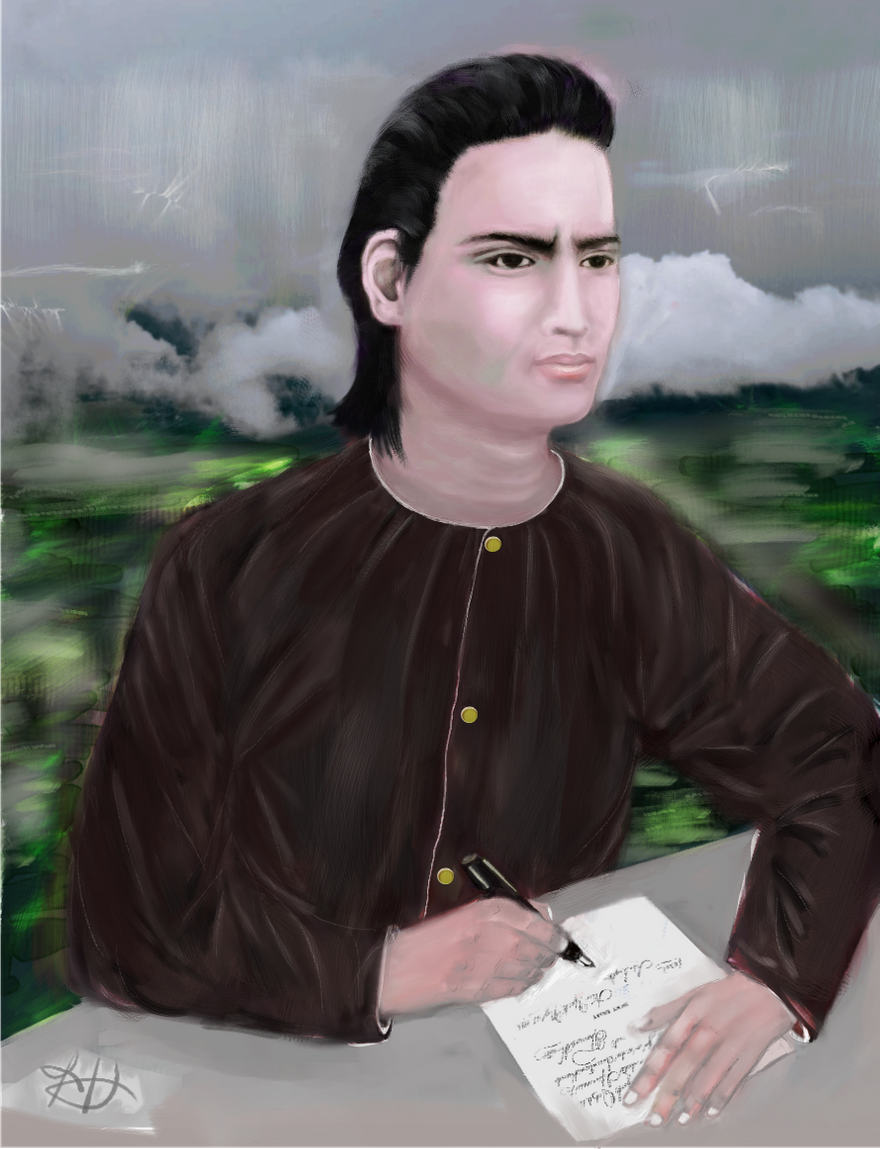 Lord Master composed this poem for Mr. Ngo Van Nguyen suspected Him of obstructing his attempt to be an in-law with Mr. Ky Gioi in Bac Lieu.

As I sit ruminating on the stories of old,

Saints don’t know how to satisfy the folk.

They’ve strived to be debt-free,

But the debts still pop up unexpectedly.

Looking up the worldly, I almost cry,

I envy a burst of laughter,

But I can’t bring myself to chide the dullard.

They don’t grasp the compassion law,

Labeling the Monk as a society bore.

The boat of Insight in the high seas,

It doesn’t mind if storms break it to pieces.

The commoners by nature are laic,

What matters ahead, they can’t predict.

Romances are filled with a lot of corpses,

The lessons of old are familiar to most.

Even the Saints beware of reprimands,

From shamen(1a) to the adherent,

Their matchmaking (2a) is abhorrent.

Why don’t you examine if gossips are false?

A chess game is facing a final raid,

Sooner or later, its fate will be laid.

I express all my poignancy,

If someone risks being a sinner,

Whatever the gossip is, I will accept.

By compassion, I have to incur bitterness,

Despite a lack of reward or harshness.

By a renouncer of worldly vengeance.

I turn empty-minded and purified adept.

In fact, through calamities at lengths,

I had left my native village far behind,

Let alone others, my family was out of mind.

I resolve to attend the shrine for vowing,

Together with Buddhas, to bless the living.

For those in dreams to contemplate.

Worldly events are illusionary, after all,

By the holy bell, early quit the desire river,

Lest it drags you into the sea of dukkha(4a).

Though you’ve achieved fame and gain,

You shall sooner or later let it go in the end.

Yellowing leaves will fall, my people!

Per one thousand years, there is a time,

On Investiture (5a), the Supreme Being decide.

Those who have performed flawlessly,

Will be rewarded by Buddhas, Saints, and Fairies.

Constants and Five Virtues (1a) in confusion.

Though I have incurred so much pain,

I shall accomplish ‘compassion’ for humans.

The other day I’ll have met my manly goal,

Now I haven’t yet achieved my aspiration,

Inopportune, I still keep my determination.

Throughout history, heroes and heroines,

A manly vow across all horizons,

Saintly as they are, they roam four oceans.

They have shaken thugs off the nation,

It sends a night message to all sentients.

The full moon is in mid-Autumn brighter,

It whispers as if a twig teased the bird.

One sees in that person his integrity,

Expresses their wish to find out who he is.

One nervously wakes up from Nam Kha (6a),

For what use their fame and gain are.

The Autumn sky is sad and gloomy,

Entangled with disasters as Heaven privy.

Alas! So distraught is the worldling,

I don’t care for my well-being.

Half vaguely, half clearly, prettily,

Tonight’s moon seems to peep at me.

Chuckling, I talk to Hang-Nga,

Living in a miraculous transient realm,

I hardly fly high in a freshen organism.

Talent tends to face its shock,

The irky Creator devises such a paradox.

Rivalry is no longer in my bosom,

But merit cultivation to wait for blossom.

My affection is geared toward all places,

May my thanks go to the devotees.

Back to the top

(1a) Shamen: Phonetised in Sanscrit "sramana", in Chinese means 勤息, that is the practician devoted to the goodness cultivation and elimination of all evils. Initially, the term refers to the ambulant monks practicing 'asceticism'. Gradually, it applies to all the monks practicing Buddhism. Nguyễn Quốc Hùng dictionary: Buddhist and  monastics.

̣(2) Parents and monks' excessive interference in the spontaneous relationships of boys and girls who have their legitimate goal of establishing a happy family, may put them at risk of breaking down on the basis of their superstitions, the results of their horoscopes, under the contrivances of divinators who often appear at temples, disguised as monks, for no other purposes than profiteering. Instead, the parents should provide the young couples the guidance necessary while ensuring that they are aware of the consequences of their romance and responsible for their choice.

(3)Vajrayana: Vajrayana, the Diamond School, originally exclusive to Tibet (in the 20th century CE the Chinese occupation of Tibet forced it out of the country), emphasizes the permanence of the Buddha’s teachings as symbolized by the vajra (thunderbolt), a ritual implement used for ceremonies, employs Tantra (techniques to reach enlightenment quickly) and focuses mainly on lay practitioners. Mahayana: Mahayana uses Sanskrit as its main language, and monastic and lay followers work for the liberation of all sentient beings, making compassion and insight (wisdom) its central doctrines. Theravada: Theravada is the only remaining school from the Early Buddhist period. Its central texts are in Pali (Pãli Canon), the spoken language of the Buddha; and its exclusively monastic devotees strive to become enlightened for their own liberation.

(4a) Dukkha: Suffering or pain, in Hinduism and Buddhism.

̣̣(5a) Investiture:  This refers to the Long-Hoa Assembly where the genuine practicians will be accordingly saved and appointed to repopulate the new world to arise from the apocalypse. This is based on millennialism that there will be a Heavenly Justice to preside over the last stage of the world to re-establish a new Age.

The moral virtues which Lord Master refers to as professed by Confucius consist of Three Constants, which should be entirely observed by the human being if the latter want to maintain a perfect social order based on righteousness: filial piety toward parents and grandfathers, loyalty toward the King, and faithful husband and wife relationship.

3a. The singing trainee first learns the basic musical notes such as Ho, Xu, Xang, and Xe. Cong, Liu, U, then the Northern scale of sounds which are the most important for the learner to learn and master.

By simultaneously vocalizing and playing an instrument, the trainer transfers the solmization lesson to the trainee by a directly transferring method. Using musical instruments to attune to the solmization lesson can help the novice of the amateurish lessons attain the scale and rhythm of a piece of music. https://doncataitu.blogspot.com/2012/08/huynh-khai-xuong-am-trong-ca-nhac-tai-tu.html

(6a) Nam-Kha: The story belongs to the Tang dynasty under which a scholar surnamed Lu failed in his examination. On the way home, depressed and hungry, he dropped in a small pagoda by the roadside and asked for food. The pagoda was poor, therefore the monk cooked maize instead of rice. Because of tiredness, Lu did not take long to fall asleep. In the dream, he saw that he succeeded in the examination, was appointed to a high position, and even married the princess, when he was promoted to the prince consort. He reached the top of affluence which no one had. However, when he went halfway, he suddenly confronted the enemy’s aggression. Lu could not resist it. His bodyguards were killed off. His carriage was destroyed. They grabbed him and his wife by the neck and held a sword to their throat.. Lu panicked and called out. He woke up and realized that this was only a dream. Yet, meanwhile, the maize in the casserole had not yet been ready to serve.

Hang Nga is a legendary personage which exists in the folklore of sinitic societies. It is where the Lantern Festival is annually celebrated to greet the Full Moon, that happens on the 14th or 15th of September each Lunar Calendar year.

The anniversary grows more popular by the day when almost every Western country also sees it as the Day of Children and holds a celebration like any of their traditional days like Valentine’s, Father’s, Mother’s Days.

5a.  San-Ha, in Han-Nôm, means 'Mountain and River', that is, one's country, in a poetic sense, connoting patriotism.

(7a) Lac Hong is the name of the Vietnamese race of people which appeared in the earliest era of nation-building. It is also called Hồng Lạc, the title of a country which can be traced back to more than 4000 years in history. Hong-Lac: a combination of the Heirdom ‘Hồng Bàng’ by the founding ancestor of Hung Kings who proclaimed ‘King Duong Vuong, and called his newborn nation “Xich Quy”, and of Lạc Long Quân, his successor, who founded the Dynasty of Hung Kings. The first Hùng King (c. 2879 BC) During a few thousand years in the Late Stone Age, the inhabitant populations grew and spread to every part of Vietnam. Most ancient people were living near the Hồng (Red), Cả and Mã rivers. The Vietnamese tribes were the primary tribes at this time. Their territory included modern meridional territories of China to the banks of the Hồng River in the northern territory of Vietnam. Centuries of developing civilization and economy based on the cultivation of irrigated rice encouraged the development of tribal states and communal settlements.

Early Hồng Bàng (c. 2879 – c. 1913 BC) As rule was passed to the Hùng king's male heirs, Kinh Dương Vương was succeeded by his son Lạc Long Quân, who founded the second dynasty of Hùng kings in c. 2793 BC. Starting from the third Hùng dynasty since c. 2524 BC, the kingdom was renamed Văn Lang, and the capital was set up at Phong Châu (in modern Việt Trì, Phú Thọ) at the juncture of three rivers where the Red River Delta begins from the foot of the mountains. Middle Hồng Bàng (c. 1912 – c. 1055 BC) By 1500 BC, the coastal residents developed a sophisticated agricultural society.

Late Hồng Bàng (c. 1054 – c. 258 BC) The tidal irrigation of rice fields through an elaborate system of canals and dikes started by the sixth century BC. The Hùng ruler of the Eighteenth Dynasty led the armies to conquer what is modern-day Nghệ An and Hà Tĩnh Provinces. A rival people, the proto-Cham people based in modern-day Quảng Bình Province, resisted and a clash between the two sides was inevitable. The Hùng forces defeated the proto-Chams, annexing the land. The Hồng Bàng epoch ended in the middle of the third century BC on the advent of the military leader Thục Phán's conquest of Văn Lang, dethroning the last Hùng king in c. 258 BC. After conquering Văn Lang, Thục Phán united the Lạc Việt tribes with the Âu Việt ones to form a new kingdom of Âu Lạc, building his capital and citadel, Cổ Loa Citadel in Hanoi's Dong Anh district. The Lạc lords maintained their feudal influence long after the demise of the Hồng Bàng era. These feudal lords faded into history only after the defeat of the Trưng Sisters in mid-1st-century AD.