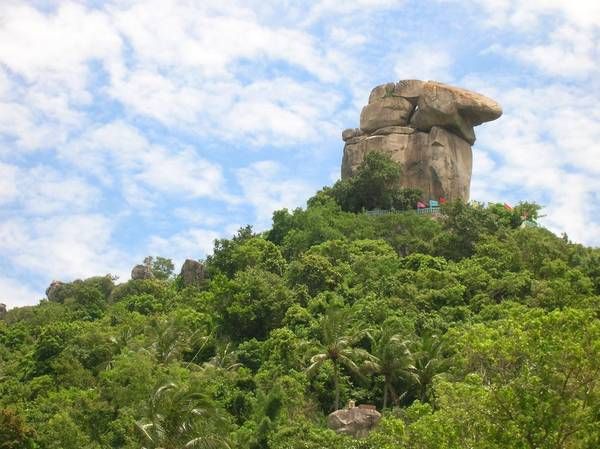 I improvise a poem, inspired by the sight.

An odyssey to My dreamland is conceived,

Yet, without the wings, I can’t take a flight.

I guide our lay bodies to the hill height,

The Seven Mountain Gods all meet up,

To Mt Fairy, Master and disciples have insight.

Foliages flutter with the wind going by,

We go back at the early rays of sunrise.

So, to all the Gods, follow in My steps,

With Master, take people out of their plight.

Only to wake people up, I bring it to light.

I exhort people to shine their conduct,

Practice in order to ascend the Paradise.

(Lord Master read these four section poem to the Village Master at Thoi Son (Chau Doc) which he wrote while on the hill and, back home, He dictated to his disciples)

Through the Collection of Oracles and Poems, each article has its date and place of composition. As of the 18th of May, Wood Rabbit, Lord Master preached, cured diseases, and wrote out oracles, odes and poems, whose contents are imbued with Buddhism; at the Hoa Hao village, He wrote Four Volumes of Oracles and several proses and short poems, till He visited Mt Sir Parrot. He improvised Four Four-Line, Seven Words poems. The Village Educator Tap of Thoi Son who joined the visit as a stenographer, dated them the 14th of January, Metal Dragon, which he presented to Lord Master and which was approved. Since Lord Master launched the mission till he wrote ‘Mt Sir Parrot Visit’ whose such titling to me sounds unusual. We may wonder: why did Lord Master visit Mt Sir Parrot prior to making preaching trips somewhere? This question prompts us to think that the visit to Mt Parrot was aimed at mobilising Gods from the mountains to descend for world salvage.

With Master, guide people out of their plight.”

After His Mt Sir Parrot visit, He started His mobile preaching at different places. Noticeably, the starting point where He arrived at was My Hoi Dong village. Finishing the article, He dated My Hoi Dong, 22 January, Metal Dragon. I stated this in the hope of creating a comfortable impression for the reader to understand the visit to My Hoi Dong was the first trip leading up to His more comprehensive preaching voyage. What I meant is: the Lam clan at My Hoi Dong Village has made significant contributions to the Lord Master of Hoa Hao Buddhism from an literary point of view.

Note:  Translated Mt Parrot is a simple version of Mt Sir Parrot, with 'Sir' added to show respect for the resident deities living on it.