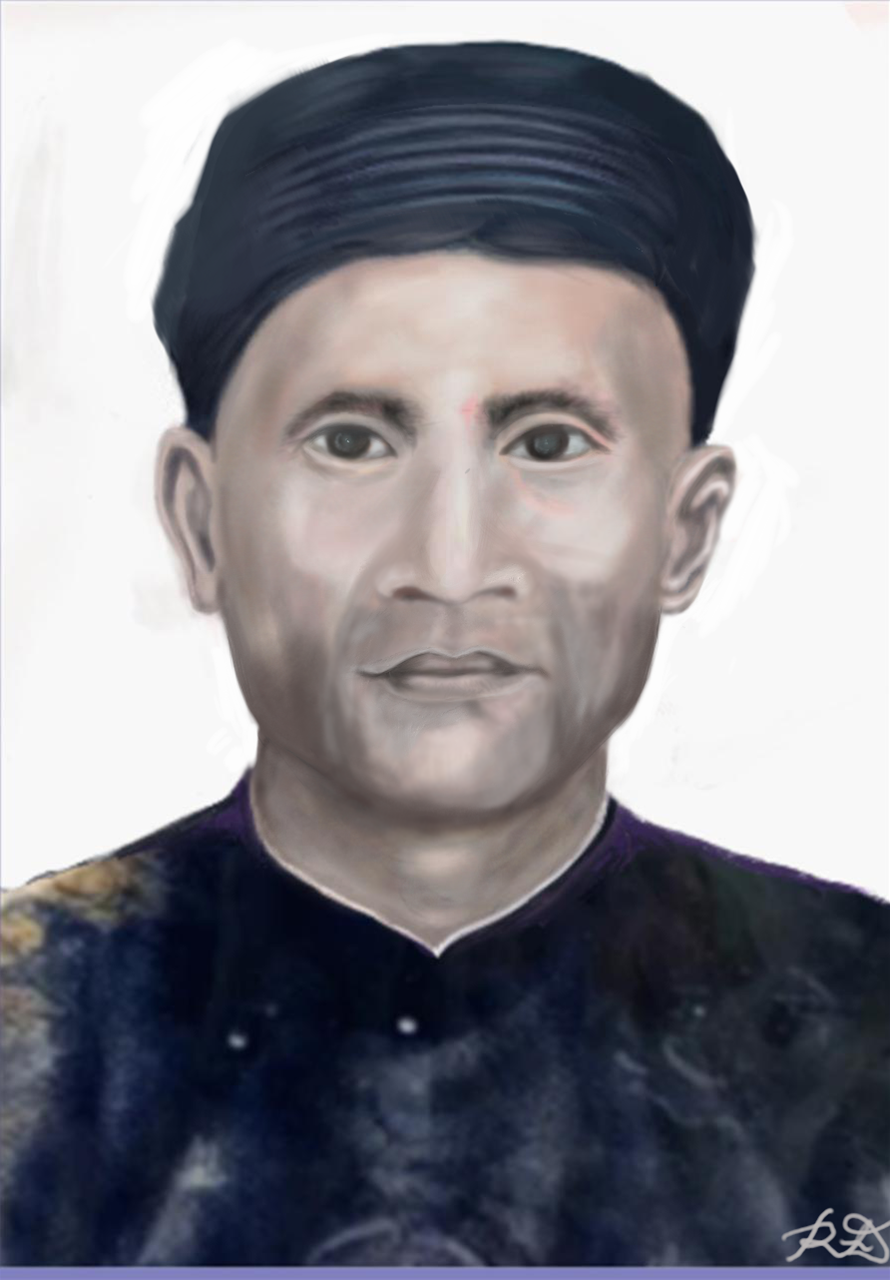 Origin: Mr. Le Van Phu was born and grew up at Chau Thanh District, Camdodia, to the union of Mr. Phan Van Thom and Ms. Le Thi Kim. He belongs to the Phan lineage as his paternal grand father is Phan Van Tung, a literati in Ben Tre province. After his aborted anti-colonial revolt, he exiled to Cambodia. His paternal grand mother was a disciple of Buu Son Ky Huong, thus having absorbed these teachings since his young age. When he was 16, she passed away. She knew the date and time of her death.

Initiation:  After Lord the Master launched His Mission, at first, he had a friend of his, Ba Tong, who introduced him the Oracle's IV Volume “Awakening” (Giác Mê Tâm Kệ). Having read it, he regarded it as his favorite sutra, and firmly told Ba Tong that this must be the very Buddha who descended as a messiah. He himself set up a Three Jewels altar and converted to Hoa Hao Buddhism.   While, in Cambodia, he had not yet met Lord Huynh the Prophet, he frequented a prominent villager Nhu, a senior at the Phu Xuan Islet. According to Nhu, he often went to Phu An village, learnt by heart the Lord's Oracles and Poems. Whenever possible, he read them to the public audience and had them copied.

Activities: In 1964, as a Hoa Hao Buddhist, he attended seminars and made trips far and wide. In 1965, the Hoa Hao Buddhist Congregation was established, for the first term, and he held the postion as a part of the Chau Phu District's Preaching Team. During this time, he continued proselyting, participated in Huynh Thanh Mau courses for the Members of Management, and the Nguyen Xuan Thiep preacher training program held by the Central Committee. Later, he was promoted a provincial preacher of Chau Doc, thus making him busier. He opened courses called 'Introduction to Dharma', training preachers, and met the needs of seminars, held at home or by Committees at all levels across the country. He lectured on Oracles, and ensured that the both the general public and his fellows satisfactorily understood them. Besides Chau Doc's mission team, he was part of the Consultative Council of the Central Hoa Hao Buddhism Congregation. As a Central Committee member, he made evangelical trips to Central Vietnam. He was also an editor-in-chief of the Lotus Magazine of Chau Doc.

Since 1975, he stopped his religious activities. Like his fellow dignitaries, he had to attend the re-education camp at Nong Son, then returned to Long Xuyen. During 18 months in prison, he rather kept a low profile, with a vow to bless masses, composed poems to express his love toward Lord the Prophet, and the Tao, ready for self-sacrifice as a martyr. Below is one of his poems at Nong Son, 1975:

My time languished by while at Nong Son camp,

Despite my ordeals, my heart was never lame.

Reciting Amitabha was my unique endeavor,

I always missed my ten graces doing whatever.

I will pay back Lord Master's grand mision,

Buddha's bless is returned by helping the sentients.

The great cause is only won with a great mettle,

I firmly pledge to make the country triumphal”.

Ailing and prayer for rebirth to Pureland: In May 1979, he was suffering a severe illness when his fellow adherents flocked to visit him for the last time before his death. From his bed, he held one of his juniors, Lê Minh Chau, by the hand, and said: “During my preaching period, I've strongly believed that you could carry on the urn fire of Buddhism into the future. Thus let me ask you a question: “Do you know how many times a human life experiences 'Void'?” Junior Chau replied: “My Brother, in my humble opinion, an human life has two 'voids'.” Tho chuckled and asked for clarity. Junior Chau replied: “Dear Brother, the first 'Void' applies when we are born. Under the 'Void' theory, there is nothing essential, but the product of intertwined factors, which then is sent into the fetus till birth. In fact, it would have no destination. Thus, when we die, our bodies are returned to the fictitious Four Elements to join back its 'Void' on departure. Thus an human life has two 'voids', that is, a void at one's birth and a void at one's death.” Uncle Tho nodded saying: “Given your such level of understanding, I feel confident delegating my task to you.”

Despite his critical condition, he remained calm preaching without stumbling in any word. He advised his fellows to continue his mission, to observe the faith and commandments of Lord Master while earnestly reciting Amitabha as the Lord has recommended. He said that the Pureland method was the King of all. Lord Amitabha was the Great Master of Meditation. When one recited the Great Name of Buddha, s/he has already practiced Meditation. Notably on May 5, he lied motionless as if he slept. All of a sudden, he opened his eyes looking around as though seeking for someone and asked: “Has anyone seen someone come in?” Hue, his eldest daugther, replied: “My Dad, I saw no one.” He said: “How strange? Really no stranger?” Fourth Tin, a son of his, replied: “No one is a stranger, my Dad.” He looked around another time. All around him stood a few felllows and relatives of his. He said: “Our Lord just came in. He lifted me up in his arms and turned my head around, how come now I can't see Him!?”. Those present mused that the Lord might have come to bless him for rebirth to Pureland.

As she saw his condition getting worse every minute, a female senior practicer, Vo Thi Dong, asked him: “Big brother, do you have any more to instruct your wife and children when they're all here?”  He said: “I have no more to instruct my chilren but rather see them as any home practicer. I don't teach everyone separately. If my children and grand children know how to love me, they should follow my examples. For their attention, he said: “When I'm gone, they should remember not to send any of my belongings with me. My body should only be placed on a plank and buried. Take it to the grave and lay it down. Don't make a mound, flatten the ground for people to cultivate thereon. If my wife and children disobey me, my soul won't bless them whatsoever”. He said it twice.

On May 12, a senior lady, Mrs Thua, of Chau Phong village visited him, asking: “Brother, you've worked so hard to propagate the Lord's principles, and often urged your co-adherents to keep the Pureland method, today you're so ill that you're about to shed your body. Do you know the date and time of your death? if so, please tell the fellows in order to strengthen their confidence in the Pureland method.” He asked: “What day is today, sister?” She said: “Today is the twelfth of May.” Then he raised his fingers and counted up to three, holding the remaining two, and showed the trio. The lady said: “You mean that in the next three days you will go, won't you?” He nodded and added: “I intended to leave on the Lord's Foundation Anniversary, but I can't: I have to go before it, that's the Full Moon Day of May, sister.”

Making A Pureland Rebirth Vow and Death: The same evening, he asked his fellows to port the Lord's portrait for him to face toward the Lord and Three Jewels Altar and to make a vow for rebirth to Pureland. At 2 am, May's full moon, he himself adjusted his hands and legs and slowly stopped breathing in the supporting chanting prayers of his fellows that were hours long. Then, under the examination of the practicer Vo Van Buu and fellows, his body was gradually getting cold, except his sinciput being still warm. 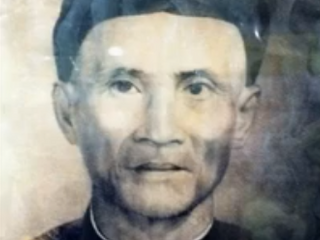 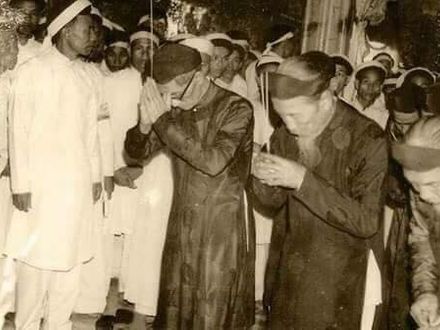